In 1856, Lewis Cass Tilton and his wife, Elizabeth Lacey Tilton, trekked by covered wagon with 6 children, an ox, and a cow from Coshocton County, Ohio to settle 40 acres of virgin Brown County land. Since then, six generations of Tiltons have made Brown County their home.

They share not just a common name, but a determination to make a life -- a wonderful life -- in what has been known as "The Peaceful Valley." To that end, they have chosen a wide range of occupations including, doctor, banker, preacher, grocer, farmer, furniture maker, teacher, and owners of many different businesses.

In the spirit of those original pioneers, and to honor their legacy of faith, hard work, sacrifice and devotion, the Cornerstone Inn was established in 1993. It is our desire to bless our guests and future generations in the same manner.

To God Be The Glory!

Photographer Frank Hohenberger captured this record of a 1930's Tilton Family Reunion in Nashville. Most of the adults in the above photo have rooms in the Main House of the Cornerstone Inn named after them.

February 1993: Lot 10 was cleared in preparation for a whole new concept, The Cornerstone Inn, with three retail shops on the first floor, a museum in the lower level and guest rooms on the second and third floors.

October 1, 1993: Cornerstone Inn opens its doors to our very first guests. Each of the sixteen guest rooms were named after Brown County ancestors and appointed according to the period in which they lived. Two rooms had very large marble whirlpool tubs. Continental breakfast was prepared off-site and served in the third floor Tower Room. Laundry was taken care of at our local laundromat by Pam, her four children, and after May 1994, Fred's wonderful new wife, Leona.

Spring 1995: A tiny kitchen was carved out of a closet in the lower level, launching the small beginnings of Cornerstone Inn's "homemade" breakfasts. Until a broken ankle in 2012, Pam worked in the kitchen every day, many times all day - a labor of love (most of the time).

New Years Day 1996: Our first full breakfast, which every day since has included hot entree selections.

Fall 1998 through Summer 1999: A major renovation transformed two of the first floor retail stores into four beautiful guest rooms, and completely renovated the lower level. The breakfast room moved to this new space. It also included a meeting room, vending area, laundry room, commercial kitchen, restrooms, and a small office. The third floor Tower Room, formerly used as the tiny breakfast nook was combined with a small room next to it to become our very first suite. Cornerstone Inn now had 20 guest rooms, including 8 whirlpool tub rooms.

February 2, 2002: Pam Tilton married Bruce Gould. Since June 1983 and until August 2011, Bruce served faithfully as Nashville's Postmaster. He gradually began taking on hotel chores and projects whenever he could.

June 2004: Cornerstone Inn began leasing the second floor of the building located at 87 East Main Street. Pam's vision and Bruce's hard work resulted in a complete renovation of the space to include a common area and five new guest rooms, known as The Upper Rooms.

May 2005: 1.2 acres of property directly to the east of Lot 10, extending north to Main Street, and adjacent to the Upper Rooms Building was purchased. The property is the site of the former Village Motel, which opened in the 1930s. Mrs. Tudie Kuhn owned and managed the motel from the early 1960s until 1996. It had many small 1-2 unit buildings that were modernized with "dry gas" heat in the 1940s and indoor plumbing in 1960.

Bruce began renovations on Tudie's House, saving it from the wrecking ball. The remnants of the old Village Motel buildings were removed. One of the units, fondly remembered as The Smokehouse was moved here in the 1930s from Elkinsville, Indiana. It was an amazing 12' x 12' log structure, originally built in the 1880s for preserving meat. It had an enormous 14' long 12' deep and about 5' thick board that spanned it from front to back. The Village Motel outfitted it with a full-size bed and added a bathroom.

Bruce and Pam disassembled the structure and donated it to the Brown County Historical Society which has since rebuilt it near the Old Log Jail, just a little more than a block to the north of its previous address. It was no doubt the most popular honeymoon room in Nashville for many years. Check it out!

December 2005: A driveway, now known as Cornerstone Lane, was cut through the new property to connect the Main House to the Upper Rooms and Main Street. 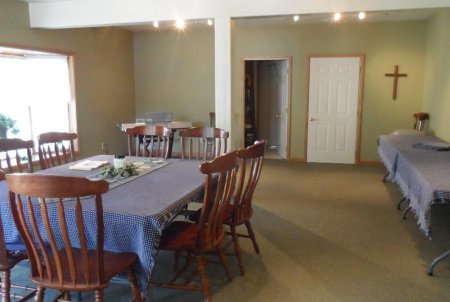 January 2006: The owner of the business occupying the last remaining retail shop in the Main House retired. The space was converted into an additional meeting room, now known as The Chapel.

October 2006: Bruce and Pam moved into the house on the newly acquired property, now known as Tudie's Cottage, fully enjoying a very short walking commute to the Inn and Nashville's Post Office.

August 8, 2008: We broke ground for our largest project to date - the construction of the three Cottage Suite Buildings, located on the 1.2-acre site of the former Village Motel. A two-level garage was also constructed next to Tudie's Cottage.

Winters 2009, 2010 after work: Bruce finished out the upstairs levels of the garage next to Tudie's Cottage creating a two-level studio apartment with a fun secret stairway, making a great spot for our grown children to hang out in while back in town. This space was nick-named the LOFT, an acronym for Love Of Family Time.

September 2011: Cabin 360 was purchased - a perfect transitional project for Bruce - he did most of it. At one point during the project, it had no plumbing, no HVAC, no kitchen, no stairs, no windows, almost no floors, and no chinking between the logs. Whew! What miraculous transformation.

November 2011- April 2012: A screened gazebo was added to the Cottage Suites Courtyard and new exterior sidewalks were installed in front of the Main House. A first-floor guest room was converted to a large new welcoming lobby area and the old lobby was converted to a real office for Lauri. New HVAC systems were installed on the first floor and another first-floor guest room got a total makeover.

June 2012: A mountain bike wreck on the amazing trails at Brown County State Park forever changes Pam's role in the kitchen and Angela Filson took over as master of the dining operation of Cornerstone Inn.  It proved to be a blessing in disguise, making a way for many future improvements in our foodservice operation.

August 2012: While rezoning the Cabin 360 property for eventual use as an overnight vacation home, Bruce and Pam moved into it (quite a downsizing experience), and prepared Tudie's Cottage for use by overnight guests.

September 2012: Additional work was completed on the LOFT to add it to the Inn's inventory of guest rooms. Pam fell in love with Kerri Brooks Pottery, fondly displayed in the LOFT  (also available locally at the Trilogy Gallery across the street).

December 2012:  Cabin 360 rezoning was successful.  Bruce and Pam could no longer afford to live there and they went house hunting.

Spring 2013: All Main House guest rooms got a bathroom makeover.

June 2013: Bruce and Pam moved into their new home on a hill overlooking Nashville, and the first overnight guests were welcomed into Cabin 360.

February 2014: The most amazing chef of all time, John Garrett joined our culinary team. Our foodservice operation began its transformation and took a quantum leap!

April 2014: Added another new gazebo to provide a covered outdoor area where smoking is allowed. The geothermal HVAC system serving the Main House is proactively replaced by a new one.

Spring/Summer 2014: Bruce reclaimed the area on the other side of the bridge near the Cottage Suites courtyard to create a fun, fenced outdoor space. He built a firepit and an "outhouse" for fire supplies, added a swing and other pleasant "sittin' spots."

February - September 2015: Our most extravagant project to date - a total renovation of three guest rooms, including transforming a first-floor guest room into the first king whirlpool suite in the Main House and the creation of two premier guest suites for those most special of occasions: the all-new Tower Suite and the merging of two guest rooms on the third floor into one grand suite, Room #14.

August 2016: The wide brick stairs at the west end of the Main House were removed to create an area for additional landscaping and a more comfortable seating area for our guests on the west end porch. Cabin 360 got a spruce-up with a new deck and outdoor furniture on the back and a brand new blacktopped circle driveway out front.

October 2016: To celebrate the beginning of our 24th year on October 1st, we launched many more visible elements of our 2016 rebrand exercise with a new logo, adoption of corporate colors, apparel and a new collection of logo items available for sale. Our Cornerstone Inn coffee mugs are the best!

November 2016: The office behind the front desk, received a complete makeover. Our local wood-crafting gurus, the Clark Brothers, designed creative new spaces for our sales director, food services director, and Pam. The administrative side of the operation was growing deep and broad to ensure quality services for our guests, our team, and our community. In 2016, we also added marketing, graphic design, and interior design staff members.

2017: The lower level of the Main House got a major makeover with new flooring, color scheme and decor. Plans were underway to completely extricate the business from the shackles of the Bed & Breakfast label - all repeat guests are advised of this change.

March 2018: Emma's Cafe was launched - an admittedly difficult move, but an essential one for the future existence of Cornerstone Inn. Breakfast is now open to the public. Cornerstone Inn guests receive a discounted price for our signature breakfast while lodging rates remain the same as they have been since 2011!

April 2018: 1.1 acres at 153 and 169 East Main Street, just east of the Cornerstone Inn property are purchased and renovation plans are implemented.

September 2018: Extensive renovation work on a portion of the building at 153 E Main St was completed and The LODGE opened to Cornerstone Inn guests. With 3 private guest rooms which may also be reserved together, The LODGE is a wonderful compliment to the Cornerstone lodging collection with gathering space for groups of many types.

2019: A year of recovery, reflection, and readiness for the next decade. New site work is completed linking the new LODGE property and the inn. Pam's sons, James and Andrew purchased the lot directly to the north of the Main House for possible future development. The AMAZING 2000+ seat Brown County Music Center opened. (Bruce is a founding board member.) Plans are underway for a new pricing structure and many special events.

2020: WE MADE IT! Covid-19 threatened to make 2020 the end of our story. Shocking and shaking. But God! He is our Rock!
We missed so very many of our loyal guests, especially those coming for events and reunions for many years. The late summer and fall seasons were truly remarkable,  however. We were honored and very blessed to host many, many new guests, too. We are so grateful!

"Now all glory to God, who is able, through his mighty power at work within us, to accomplish infinitely more than we might ask or think. Glory to him in the church and in Christ Jesus through all generations forever and ever!" Ephesians 3: 20, 21

We would be completely remiss to neglect to acknowledge that none of this would be possible without the amazing guests who have blessed us in immeasurable ways with their friendship, guidance, and loyalty. We have also been abundantly blessed to have had the opportunity to work alongside the most incredibly talented, hardworking, diligent, focused, and fun co-workers anywhere!